Hurricane at Hill Winery or There's A Hole In The Roof.

It’s been a long time since I was this wet and cold. Before Neil and The Horse took the stage, I was already shivering, my fingers were refusing to work and looked as though I’d just finished a swim from Melbourne to Tassie.
However, scoring a front rail position, a few metres to the left of centre stage made any physical discomforts fade from my mind. Already I knew that the ticket price was worth every cent and that this evening would leave me with memories I’d treasure for the rest of my life!
Tonight's performance of Like A Hurricane I would rank as the greatest single highlight of ANY concert that I have seen. By now the rain had made the decision to stay and really test the resolve of the band and the 10,000 saturated fans.
Poncho’s keyboard seemed to be stuck above the stage and couldn’t be lowered. Neil was standing in the middle of all this just pointing towards the stage roof, waiting. Finally the battered keyboard was lowered but by this stage hurricane-like winds were swirling, causing it to swing wildly around the stage like a crazy, uncontrollable pendulum. Poncho couldn’t steady it enough to begin playing the intro so Neil went it alone.
Then the rain was turned up to ”11”.
Poncho momentarily gave up, the stage was inundated with water and part of the roof gave way to the weight of the rain, tipping its load directly onto Neil!
At this point I expected that the show was going to be cancelled as the crew frantically tried to protect equipment from damage.
I suppose Neil has seen everything over the decades and he never once flinched or lost his composure. Some of his guitar work might sound unusual throughout Like A Hurricane as he was drying Old Black with his shirt as he played!
Amazing. The crowd went nuts with enthusiasm and revelled in this insane, yet wonderful situation.
An absolutely incredible moment from an unforgettable show. A band of true professionals and passionate performers. Thanks to Neil Young and Crazy Horse for coming to my home, Geelong!


Enjoy. Hopefully your computer doesn't get water damage from this recording (haha)! 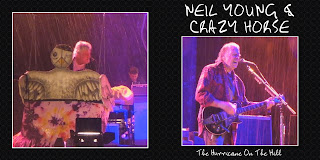